hot on the heels of susan weinert, here’s susanne alt at the ever-popular bimhuis.  not surprisingly, after this much time, she has more than the 2 albums mentioned in ‘musicfinder’s comments below.  btw, you’ll need to update the setlist in the info file (don’t have the time tonight to fix the .zip).

susanne alt has released two cd’s (nocturne & desire) both worth having! the web site is http://www.susannealt.com/en/index.php

i had a bit of a jazz sue queue today: a couple of shows by susan weinert (of which one is here), a couple from susie ibarra, one show by susanne alt.  rather surprisingly, it all went very well together (not that that’s so important, but it’s nice when it works out).   tip o’ the hat to ‘jazzrita’ whose seeds on dime are always top notch.  enjoy!

the first half of this show is mostly all about esther phillips, and  the second half is more chelsea wilson’s own compositions.  the show is a whole lotta fun!  there’s a bit about the band at the time, and pics, on this page about a show she did on 14 sept 2014.

i don’t see a lot of jazz from australia on dime (or i miss it?)… what i do have are mostly female jazz musicians, including shows from the sydney international women’s jazz festival, and — coming back to chelsea wilson — a 2014 recording from the ‘women of soul’ series that she produces.   maybe i’ll give that a listen next, make it a australian soul morning.

original seeder’s comments:
full credit to the band also. i don’t know the names of the individual players otherwise i’d be crediting them on here also. [i’ve identified most of them – pete]
it was a small crowd but a fun show which i’m glad i attended (i was thinking of not going). there were a couple of mistakes/false starts but this didn’t take away from what a very enjoyable show.

chelsea wilson is a melbourne based soul & jazz singer who (after being knocked back by a number of record labels) independently released her debut full length album “i hope you’ll be very unhappy without me” earlier this year which has been getting some serious accolades. (what’s that they say about revenge?)
here’s just some of those accolades.

check out www.chelseawilson.com.au to see what all the fuss is about & as always support independent music!

here’s what i started the day with — and then followed it up with 2 more sphere concerts.  time for a change, but first to post this up here.    they also played 2 days later at teatro morlacchi, in perugia, some of which has been released. 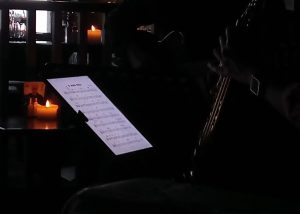 not that the old jazz giants aren’t wonderful, but they’re also gone or will be soon.  so it’s nice to run across younger jazz musicians, like theo crocker, or avishai cohen, vijay iyer, gina schwarz, ambrose akinmusire, melody gardot etc.  and of course, there are the jazz musicians that you might see in small local clubs (and if you don’t, why not?) — and they’re the ones who really deserve a big hand, they make it happen every day, every week for all of us.

no cover.  the photo has no connection to this show.  It is of chris engel (alto sax) (foreground) and orlando molina (guitar) (background, though you can’t really see him at that exposure), at the ocean bar & grill, last saturday 4-may-2019.  excellent show, and we were very lucky with our table.

here’s a pairing of two greats, from 30-odd years ago.  ubu shared this on dime and also on his now largely quiescent blog, in 2009, after some well-detailed edits (thanks, ubu).  some interesting comments there, including from preslives, who wrote “…the date with joe henderson may disappoint some familiar with their classic blue note output, as they don’t really play together in the way that they did back then. by 1988, each is in his own separate musical world. i get the feeling that andrew is just sitting in on joe’s gig. on the other hand, the way that andrew deconstructs some of these standards is astounding. what a genius he was!”  i take his point, but for me this show is all about the “on the other hand” side of the equation.

ubu’s note: the first set ends after #3, as this came (from dime), “invitation” ended disc one. if this was indeed a live broadcast, maybe “invitation” comes from the beginnig of the first set and was broadcast during the break until the second set began? the track was edited in a way that allows no clear judgement, but i have some doubts about an 18:17 minute track fitting into the break.