i feel as if luck was with me tonight, picking something just right on my first try.  none of that “no, not in the mood for that” or “oh dear, that’s not really a very good recording, is it?” business.  and, curiously enough, it’s the second time that east orange has come up in as many days, three if you count “when it’s apple blossom time in east orange, new jersey, we’ll make a peach of a pear”, which the first time reminded me of (and i even remember the little tune my parents sang it with… and in fact, it’s a misquotation of a line from the lobby number, by danny kaye. why’d i look it up anyway?  i prefer my folks’ version, naturally).  anyway, you’ll be happy to know that this is nothing at all like danny kaye.  or not much anyway.

sample: t04 eroupa.mp3 heck, i woulda posted this show if this was the only song they played.
download: CharlesErland_1995-07-11_EastOrangeNJ.zip

here’s a little set that i was listening to this morning while wasting time.  some excellent jazz, and a decent recording.

recorded and engineered by jazzbike2 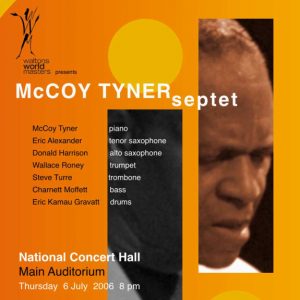 here’s a nice show from the national concert hall in dublin that i recorded off the air & seeded on dime in 2007.  it’s a great show, and very well recorded but wasn’t so good for folks who actually attended.

the rté announcer comments on the “truly tragic quality of the sound”.  and when i seeded this on dime, retnull described it as “the worst live sound i’ve ever heard”.   but, fortunately, as the the rté announcer added, “rté’s soundman was a bit wiser, and the recorded sound is very good indeed.”

the jazz alley show on rté has been dropped in my absence, which is really too bad.

finally, a shout out to the fine folks at waltons music and the waltons new school of music (where my daughter studied piano until we moved away).  this was one of the waltons world masters series, and their support for that series (and this show) is appreciated.

cover by pete, using a screenshot of the concert poster (downloaded from the waltons new school website, and used without permission). 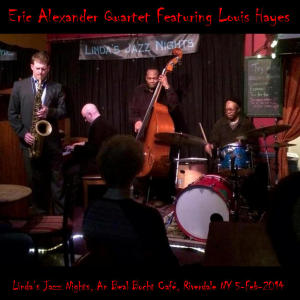 here’s another show featuring louis hayes, this time as a sideman, that jazzbike2 shared on dime back in feb 2014.  the seed included a number of photos of the show (included), so i took the liberty of making a pretty basic cd cover (front only).  when you consider that louis hayes was born in 1937, and so it 77 years old… !

notes: support linda’s jazz nights by coming out for these shows: www.lindasjazznights.com