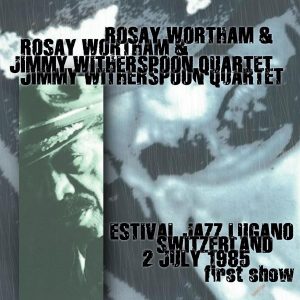 so who doesn’t like jimmy witherspoon?  here he is at the estival jazz 1985, one of a series of great seeds on dime (“a swissbird , simplexsimplicissimus & supermax release”).  but i’d never heard of rosay wortham (or, according to discogs.com, more often rozaa wortham).  she’s great, but probably jsut far enough into the ‘soul’ category to escape my rather divided attention.  and internet searches return very little beyond what’s on discogs.  hmmm.  anyway, this show’s a bit hard to classify, some jazz, some soul, some blues, all great.  good “friday late afternoon” music too.

like all the swissbird releases, this is a phenomenal soundboard, i’ve downloaded a number of them from dime (in this case, a reseed by ‘langtang’ in january 2015).  actually, over a couple of days, i downloaded this show along with shows by gal costa (2006); maceo parker & the roots revisited (1993); new york jazz giants (1992); slickaphonics (1988); and patti austin (2004).  someone somewhere was busy, or maybe just trying to keep their ratio above the plimsoll line.

obatik.com has a list of most of the swissbird releases, if you’re curious.  and his comments made me realize that there’ve not been any lately.  wonder what happened to swissbird, simplexsimplicissimus & supermax?

cd covers from the original seed.

this is like a blast from the past, reminds me of the music i’d listen to in the dc / charlottesville area in the late 70s to mid 80s (if perhaps a bit more polished than some show then, eh?).  it sounds like a fantastic show and this excellent good audience recording does it justice i think.  great show, great fun, i’da like to have been there.  so, here ya go for halloween… enjoy!

happy new year. here’s just something i was listening today, that i downloaded in february last year (already that’s last year!  the annual shock.)  it was new to me (but then so much is… that’s what ya get for listening to radio for years and paying no attention to announcers), and is a bit different than most other jazz vocals that i’ve heard.  i’m definitely going to have to get me some of mose allison’s albums.

01) instrumental
02) lost mind (percy mayfield)
03) look here (mose allison)
04) everybody cryin’ mercy (mose allison)
05) your molecular structure > one of these days (both by mose allison)
06) feel so good
07) do nothing till you hear from me (duke ellington, bob russell)

sample: d1 t7 Meet Me At No Special Place

december hasn’t been a good month for this blog.  and doesn’t promise to get much better.  so, before we go on an xmas mini-break, here’s something a little different:  a good early show by bethesda’s own nighthawks, at the gone-but-not-forgotten cellar door.  wow, what a venue!  although i actually went to desperado’s, across the street, a lot more (more of this sort of music, and a bit cheaper which also helped).

i’ve never seen an audience or soundboard recording from desperado’s.  a quick search on dime turns up one, a 1980 albert collins show that looks pretty good, so i’m downloading that.  the description accurately calls it a “smoke filled bar”.  haha!  actually, the balcony there would have been a perfect place for taping, so it’s kind of funny that there’s not more.  opportunities missed…

anyway, this was uploaded to dime as a single untracked flac… i’ve tracked it.  it’s a great show and a good example of one of my favorite bands at the time (along with the allstars from charlottesville va, that’d make two).  i don’t know the lineup, but it was probably the same as normal for that period:  mark wenner – harmonica & vocals; jimmy thackery – guitar & vocals; jan zukowski – bass; pete ragusa – drums & vocals.  there’s a bit of a ‘hawks floooooood going on right now, so i’ve stocked up on vintage 70’s & early 80’s nighthawks, including the george thorogood show when

the nighthawks were playing a gig across the street at a place called desperados at the same time the destroyers were playing here at the cellar door. the destroyers and the nighthawks were playing “madison blues” at the exact same time, so george and jimmy thackery (lead guitar and vocals for the nighthawks) walked out of their own gigs, passed each other in the street and joined with the other band. both george and jimmy sang a few verses and soloed a bit with the opposite band and returned to their own gigs to finish out the song!!!

the show was seeded on dimeadozen as 1 un-tracked .flac file in dec-2014. i’ve tracked it, trimming 4-5 seconds
of dead air at the start & end, and 40 seconds of dead air between tracks 16 & 17 (actually, it sounds as if the
two tracks overlap a bit; that overlap was in the original). btw, to me it seems both that the first song might
have been cut & faded in, and also that the first show seems a bit short; that might just be me, but i suspect
that this is not the complete show (i.e. i think that the beginning of 1st show is missing).