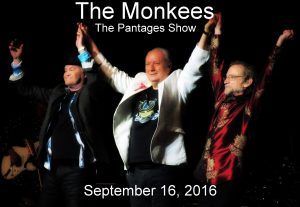 this is for an old college friend of mine.  the zip files are only going to be available for a couple of days (until he downloads the files). the comments below & the picture (cd cover?) are from the original seed.

i don’t listen to this sort of thing anymore, but i must say:  these songs have held up very well.  a quick check of the sound quality turned into listening to the whole show.  “one never knows, do one?”

notes: this was billed as michael nesmith’s final performance with the monkees – he has appeared sporadically in guest slots during their on-going 50th anniversary tour, but, peter tork had a family emergency that precluded his ability to perform in arizona, so, nesmith stepped in. this was the perfect lead in to this show – tork returned and nesmith had two previous shows to “warm up”. the result has monkee fans all over the internet in a tizzy; this was a fabulous performance with a once in a lifetime setlist which was completely different from what they had been playing the entire tour, and even different from the previous two shows that tork missed.

rhino records owns the rights to the monkees’ catalogue, and, they have already announced that this show was neither filmed nor profess- ionally recorded – fortunately, amateur archivist elliott marx took it upon himself to record the show “from start to finish” and shared this recording on facebook. i asked him if he was able to share the lossless files and he shared them via webtransfer; i took his flac files – which, he noted, he had equalized and added fades; it also sounds like he used the auto setting on the mic levels – and extracted to wav to track in cdwave, then re-encoded back to flac to share here on dime.

this is a stunning performance, featuring four songs from their outstanding new album “good times!” including the universally hailed “me & magdalena”, which was written by ben gibbard from death cab for cutie. the recording itself is very strong, especially by monkee fan standards; it’s very clear and enjoyable for the hardcore fan and casual listener alike. as it stands, the recording is a document of historical import in the world of monkee fans, as this is the end of the road for the living members of the band; micky and peter continued the tour in las vegas without papa nez.

please don’t profit from this transfer – share it, post it, give it away, but, don’t make money off of it. 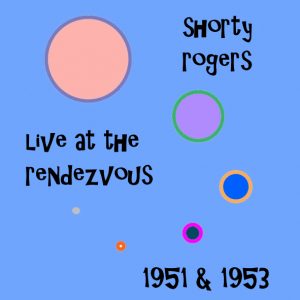 sometimes the thought really is as good as the deed.  here are two short performances by shorty rogers (among others!), live at the rendezvous ballroom in sunny balboa beach, california, from the early 1950s.  given the age of the recordings, these are phenomenal recordings.  i’ve always heard about ‘west coast jazz’, ‘west coast sound’, but never really thought about it much.  now, the next stop will be shelly manne, no doubt.  anyway… enjoy!

reference note:
there were four records made in this “jam session” series,
and one, js-103, has already been posted on dime to good effect 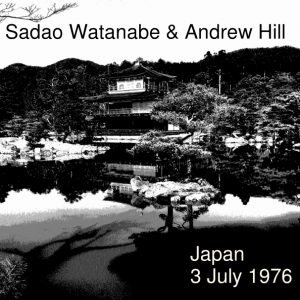 i’ve been away for a couple of weeks, and since getting back have mostly been listening to beverly kenney and shorty rogers complilations that i just got in from fresh sounds records in barcelona.  this was the first thing otherwise that sort of caught my eye (or ear, as it were).  speaking of which, i have to upload some shorty rogers, of whom i have but three shows.  up next, perhaps.

[radio broadcast]
above is broadcast date.

from original seeder’s comments:
*i am uncertain whether this track is from this session or some other session. i checked my collection of cds with similar instrumentation and could not find a track that matched, so i do not believe it is an officially released track. if someone can understand the announement in track 9 and give further information it would be appreciated. 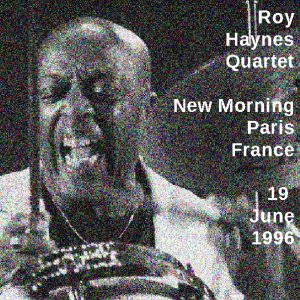 here’s another group led by a drummer, the roy haynes quartet back in 1996 in paris.  is it just me or are there a disproportionate number of drummers leading bands?  or maybe i’m just noticing that more of late for no particular reason.  the past couple of days, i’ve mostly been listening to roy haynes (friday) and shorty rogers (thursday).  this has been on dime a couple of times that i know of, including when i downloaded it back in 2011.