this was seeded on dime by  ‘mtnview’ back in january 2009.  it lasted on the tracker for an amazing 2,227 days, and was downloaded 452 times.   this was also released as a bootleg twice, first on the fresh sounds label in 1990 and earlier this year on the hi hat label.

i can’t really add anything to mtnview’s summary:

to me, this is some of the best playing lee morgan’s group ever did, even though the sound quality is rough around the edges and the piano is a bit out of tune.

sound quality b+, music a+

this is a recording made at the both/and club in san francisco, although it’s sometimes credited as “live at the lighthouse”. the liner notes from the blue note 3-cd live at the light lighthouse tell the full story. this was the gig they played right before the famous live at the lighthouse sessions in southern california and is not material released from blue note. to me, this is some of the best playing lee morgan’s group ever did, even though the sound quality is rough around the edges and the piano is a bit out of tune.

well, after that last post i took a bit of a breather.  but now it’s a new month, so maybe time for some new music up here.

there was a period around 2 or 3 years ago when i played this show in my car a lot.  noticed it on the hdd this morning, when i was randomly looking for something to play… so here it is.  i got this when jazzrita seeded it on dime back in mid-2009.

i have shorted the applaus a bit, because now the item fits on one cd!! 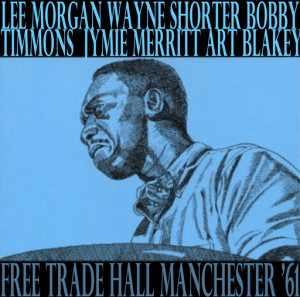 i was trolling through old shows that i had on one of my various usb drives, stuff that i downloaded from dime in 2007, 2008, looking for something that might be worth reseeding.  my ratio on dime has been gracefully slipping and sliding since we moved to korea, which worries me.  given that i have a ul/dl ratio of 1.19 on over 2 tb of activity, this isn’t a big worry, but still… it was 1.21 back in august when we got here.

anyway (a word that i think i use a lot), i found this phenomenal show, which i downloaded back in 2007 when ricola seeded it.  but i haven’t reseeded it on dime.  why not?  well, it was issued in 2012 on the (spanish?) “head on fire” label, serial hof-71, in a limited edition of 300.  but i’m pretty sure that hof is a bootleg label.  not on any blakey discographies?  a release of only 300 cd’s?  a 2012 release from a label that has no web presence at all?  no, sorry, i don’t think it’s been officially released.  thanks for any further information.

but i don’t want to mess with the nice folks on dime.  so for the time being here it is, here but (just in case) not there.  until i can find out more about head on fire.  if there really is anything to find out.

btw, searching for ‘head on fire’ yielded some interesting and bizarre results.