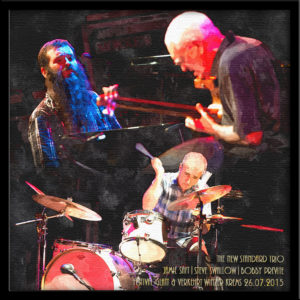 wncu-fm was playing some lovely music by jamie saft when i was in raliegh, nc recently, and the name stuck in my head for various reasons.  back home, i found this show that is also rather nice, of saft with steve swallow & bobby previte in the new standard trio playing some pieces from their eponymous album.  i was a little confused on the name, but before track 3 saft says “we’re the new standard trio”, so there ya go…

this has one of my favorite songs, willow weep for me, which i’ve generally only heard performed by jazz singers.  i’m not sure jones plays on it, though; sounds more like a flute, which leo wright did play (and i’ve added an “f” after his name, below].  but let’s not hold that against carmell jones!  there’s a bit of static in a few spots, but otherwise a good recording.

sample: t2 willow weep for me – i can’t get started.mp3
download: CarmellJones_1972-xx-xx_StockholmSweden.zip

this is another of the shows that i’d picked before my trip, but i had to re-upload it as getting ready to post it here, there were just too many changes to the info file (‘mikeos’ shared it on dime the day after the 11:30pm broadcast, ta!).  a lot of great jazz has come out of the uk, both musicians and performances.  sorry to see them leaving the eu.  anyway, a tight performance at maida vale back before any of that nonsense had started.  spillett’s website quotes the guardian, front & center: “straight-ahead, high energy jazz is his line and he does it with aplomb”.  ’nuff said.

1. no i woodyn’t (tubby hayes)
2. announcement
3. bass house (jimmy deuchar)
4. interview by claire martin
5. all this, and heaven too (van heusen)
6. by myself
7. i never know when to say when (leroy anderson)
8. interview
9. nobody else but me (jerome kern)

well after 2 concerts posted in as many hours, here’s a change of pace:  a very interesting article on “economics of bittorrent Communities”, using dime as the example on medium, at https://medium.com/@jbackus/private-bittorrent-trackers-are-markets-1d3cc3c9bacd .  thanks to erik b. who posted the link on the dime discussion list.  not sure i agree with some of the suggestions as presented in the article (have not yet read the actual .pdf), but very interesting reading.  thanks, erik b!

here’s another jfk layover special, a bit of vocals this time.  i am very fortunate:  don’t have to change terminals, found a decent spanish tapas bar, have an hour or two battery on ye olde laptoppe.  btw, in pulling the details for this one, i noticed that the info file had no setlist info.  but, crowdsourcing at its best, we have a fairly complete setlist from the tracker on dime.  so update your copy of the info file.

this is one of a number of shows that i uploaded to 1fichier, in the rather misguided belief (supported neither by past history nor any reasonable expectation) that i would have some spare time while visiting my parents.  naturally, i remember very little except that at the time, i planned to share it here.  anyway:  a good trip, now on the way home, waiting for my connecting flight, so straight to you from jfk international in ny…

* no normalizing, dae, resampling, or editing(other than start/end set fades) *

note: ticking noises on d1t01 5:45-5:50 are on master the master tape. i also
had a cold and had a small coughing problem in the second tune.

sample: (pending, but you’ll love it, sure)
download: JoeyCalderazzo_2001-05-03_Regattabar_CambridgeMA.zip

like the last show posted here (which also feature ranee lee), this was shared on dime by ‘plaz_restore’, and again the comments below are from the info file.  i love the comment “…and taurey butler (piano). this was only the third concert that butler played since joining the quintet two days prior.”  anyway, that’s about it for shows from that great northern land, at least for now.

ranee lee is a consumate performer. an accomplished singer who started out as a jazz drummer and saxophonist, now she’s also an author of children’s books and an educator. she appeared at the 2010 winnipeg international jazz festival with her quintet in her first visit in 15 years. this performance was on canada day and ranee reflected that on this same day 18 years ago in 1992, she became a canadian citizen. she’s well known to winnipeg audiences and they appreciated the passion she brought to the stage. ranee recently won a juno in the category of vocal jazz album of the year for her live cd “lives upstairs”.

this performance is a mix of old and new, and includes a swing version of “she’s come undun” by winnipeg’s guess who.  ranee is accompanied by her husband richard ring on guitar and 3 very capable montreal players: david laing (drums), morgan moore (bass) and taurey butler (piano). this was only the third concert that butler played since joining the quintet two days prior.

here’s a lovely set by oliver jones, and featuring vocals by ranee lee on some songs.  the comments below are (like the other details) copied from the info file.

oliver jones is one of canada’s finest pianist, and a top-notch composer/arranger. his career intertwines with the history of jazz in montréal where he was born and raised. if you are a jazz piano enthusiast and you haven’t heard of oliver jones, it may be because he grew up in the shadow of another montréal pianist by the name of oscar peterson. peterson was jones’ idol, inspiration, mentor, friend, and compatriot. in his own right, jones received the highest artistic honour available in canada, the governor general’s performing arts award for lifetime artistic achievement.

the scope of jones repertoire is uncanny. he normally reserves about 20% of his stage time to fulfilling requests, and few have stumped him. in this piano trio concert, the usual request time is filled with some very welcome guest appearances from some of montreal’s other jazz stars.