this is like a blast from the past, reminds me of the music i’d listen to in the dc / charlottesville area in the late 70s to mid 80s (if perhaps a bit more polished than some show then, eh?).  it sounds like a fantastic show and this excellent good audience recording does it justice i think.  great show, great fun, i’da like to have been there.  so, here ya go for halloween… enjoy! 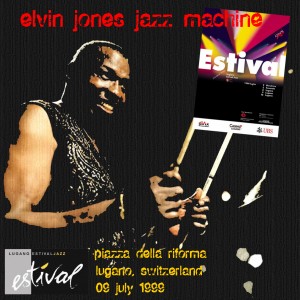 this is just a “what i happen to be listening to & thought would be good to share” posting.  i downloaded it from dime when ‘unclewolfi’ seeded it in 2007.

i’m not listened to elvin jones jazz machine much, not sure why as today it was working very well for me.  unclewolfi didn’t seem pleased with the recording (“not the best recording i captured from the radio”) but i think that has to be taken as the relative assessment that it is.

seeder’s comments:
not the best recording i captured from the radio.
it comes from rete due & seems to be a little rough &
in some parts the piano sounds a little bit overloaded.
but all in all it’s a wonderful concert.

this is probably my favorite diana krall show.  super show, great (fm) recording.  this show was part of a week-long john coltrane tribute at the village vanguard, which must have been quite something (i need to see if i can get copies of more shows from that week!).  instead of being “one that i’ve been listening to in my car”, this is “one that i need to put in my car”.  or maybe not… would that do it justice?

this show was originally recorded for the united nations refugee fund at the request of princess grace of monaco.  it was seeded on the lossless legs site a few years ago.  it’s a very good recording indeed, and makes you realize how sinatra become such a sensation.  this seems to have been issued by a number of bootleg labels over the years, and this appears to come from one of them.  the download was in .shn format; i’ve converted it to .flac using trader’s little helper (tlh) and you can download in either version.

here’s what sinatraguide.com has to say about the show:

this concert has been floating around in various formats for a long time, yet despite it’s historic importance and good recorded sound, official release has yet to see the light of day. recorded as part of a charity benefit for the united nations fund for refugee children, this was a starry evening, with an introduction (in french) given by noel coward….  and behind the podium was a young quincy jones, who has since described this concert as a highlight of his early career.  the concert itself is stunning – showing off sinatra in his prime, relaxed and at his ease as he bends notes and plays around with tempos with his inestimable grace and style.