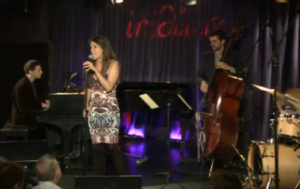 here’s a treat: hilary kole live at the iridium, singing a lot of ‘standards’, though not all standards that i’ve heard much (as she comments about one song, actually).  the only glitch is that the recording cuts out 30 minutes into the second set!  this was a live webstream (so a rare video here on cipjazz), with a bonus (ding! ding! ding!) of demuxed & tracked audio (.m4a a.k.a. aac-lc).  yeah, basically i just wanted to listen to this in my car.

and here’s another featuring geoffrey keezer on keyboards.  about time i had a dianne reeves show up here!  enjoy!

we had a request for geoffrey keezer on piano, preferably playing standards.  i don’t have any solo shows, but there were a few which included him, including this one, that i don’t remember even listening to ever.  i really liked cd1, and would recommend this for that alone.  the concerto de aranjuez set it up, and botti, keezer, et al followed through wonderfully.  but cd2 didn’t work as well for me, that’s life.  let me know what  you think.

i seem to be on a run of shows that need to be turned up!  this one just has low levels – better you turn it up than i mess with it.  be that as it may, here’s a good quality audience recording from a super canadian vocalist.  it’s a long show, with quite a bit of variety.

this show was a benefit in aid of a very worthy charity, an instrument for every child, which provides music lessons and instruments to underserved students. please check out: http://hamiltonmusiccollective.ca/

maria joão has been a favorite of mine for a number of years, and she & david linx really shine in this original & refreshing versions of songs from porgy & bess.  it’d be great to see her in a full production of the show, wouldn’t it?

the orchestra played 3 sets, this is a “best of”.

i got back from vacation in the mood for some jazz vocals, and this was the first show that i pulled up.  it’s a good recording, but needs a bit of volume, so turn it up (do i keep saying that?).   see also the comments from scooter123, below — not much to add to that!

billy vera is a legend here in los angeles. his mom was a singer on the perry como show, and her
musical talents obviously rubbed off on billy, who got his start writing songs for country and gospel
artists, such as judy clay and dolly parton. in the 70’s he formed a band, billy and the beaters,
which had minor hits such as “i can take care of myself” and “what did you think (at this moment).”

in the 80’s, he produced lou rawls last four lps and starred in some bit roles in television and
movies. he enjoyed a re-discovery when michael buble’ had a hit, 8 million copies strong, of
“what did you think.”

he is fan of doo-wop and the great songs of the 30’s and 40’s written by black artists, and this show
is dedicated to those writers, but with a big band accompaniment, a 16 pc horn and reed section. it
coincides with his new release, “big band jazz” which was released in 2013.

crowd noise in one direction was oppressive, so tracks were faded out to zero between tracks