revisiting every miles davis live tape from 1969 to 1975 in chronological order.

another concert featuring the organ, from the great rhoda scott and la velle.  i’m not familiar with la velle, perhaps because she spent most of her life in france (thanks, internet!), but she’s well matched with rhoda scott, and it’s a super show — really sounds as if they were having a lot of fun, and i’m quite sure the audience were.

sample: t06 lord, i want to be a christian in my heart.mp3
download: RhodaScott_LaVelle_LucienDobat_2010-06-25_DucLombards_Paris.zip

i’ve been listening to a lot of organ jazz lately (as i mentioned?) and dredging through the back catalogue of shows that haven’t been listened to in a while for more of the same.  this was something i recorded off the air over 13 years ago, from rté’s sadly discontinued show the third wave, back when there was still such a thing as a pcmcia cardbus.  an unwieldly little monster, but it recorded fm & broadcast tv very nicely, you just needed to be sure not to touch the computer during the recording or there’d be drop-outs.  anyway, it’s a good thing that the recording came out well, as it’s a fine (if somewhat short) show from “dr. music”.

* slight drop at around 3:01 where the song was split between files and i rejoined it with audacity.

broadcast:
rté one fm – “the third wave”, recorded 2007-08-04 from rte. described as “highlights from” the show, this is all that was broadcast on the day; i do not think it is the whole show.

comments:
recorded straight from fm to my laptop, with a little bit of hiss. rté normally only ever seems to broadcast “highlights”, but this is all of the concert that was broadcast on the day. i don’t know if more of the same show was broadcast on later shows (not that i heard, but i missed a lot of the 3rd wave shows). 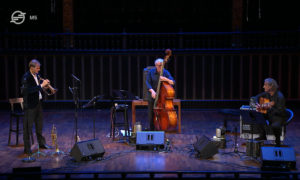 this was just up on dime in a 5.5 gb video, and really knocked my socks off.  so, having demuxed it & tracked it for the stereo in the living room and the car (which, like most cars, doesn’t really deserve the “stereo” moniker, and frankly it’s pushing it for the living room), i thought to share it here in case you’d not had the time or disk space for a belly buster of a video.  yes, call me old fashioned, i still think of 5.5 gb as a “belly buster”.  but well worth it, if you actually watch the videos.  i seldom do.  the audio track was ac-3, 384 kbs/48 khz, which i’ve converted to flac. 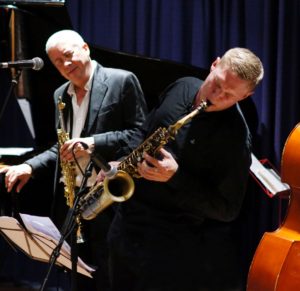 a very nice audience recording of some straight ahead jazz, a really nice show that i started my day with.   and nice to have a few photos of the show.  my photos of shows that i go to never come out very well, but then i’m using my phone & i don’t move around, so they’re all from basically the same perspective.  and like so many people, nobody in my family has a working camera, we all just use our phones.  oh well, just enjoy the music!

this show was not long after, and with the same line up as, hendrika entzian’s album pivot, released in may of that year.  she released another album (her third) marble in april last year, which i also quite liked, and which is a little more upbeat than this more sombre offering.  not sure why i’ve bought marble and not pivot, maybe because it was newer (a change from the “get the oldest first” approach?).  perhaps i should go shopping…