here’s the next of the shows that have gotten me out of the doldrums lately.  been meaning to post this all week, but life got in the way as happens sometimes.  on the other hand, i’ve listened to this around 4 times this week, and it’s still as fresh as a daisy.  enjoy!

[radio station master tape>cd-r]
sound is a solid a

photo:  a modified copy of the cover of the woody shaw / louis hayes cd “the tour volume two”

i had this on an extended rotation* of the best stuff on my well-travelled little usb drive (by now no doubt famous).  had to go back and listen to ‘the work song’ again, then find the nina simone version, then listen to this version again.  well. well, well, well.

this was shared on dime by ‘michaelmee’ back in february 2013, and well done there, michaelmee, thanks.

ran across this today, was listening to it as i worked away, and thought it might be time for a break.  ‘diego60’ shared this on dime in 2010, it’s his own audience recording.  the band is quite a line up, and are playing their hearts out, so it’s nice diego60’s recording came out as nicely as it did.  but be warned, tracks 3 & 4 should be a single track… the cutover is a little jarring (but gave me a conveniently small file to convert for a sample)

this was the last concert of umbria jazz ’82 wonderful night very good group!!

listening to some louis hayes today.  turns out that i seem like a bit of a fan of his, with this being the third show here featuring louis hayes:  last october, we had eric alexander quartet feat. louis hayes — 5-feb-2014, an beal bocht café, riverdale ny, usa  and louis hayes – junior cook 5tet w/ woody shaw — 5 apr 1976, jazzclub ostertor, bremen, germany.  well!

this one falls in between, from 2003.  i think you’ll enjoy listening to it as much as i did.

here’s another show featuring louis hayes, this time as a sideman, that jazzbike2 shared on dime back in feb 2014.  the seed included a number of photos of the show (included), so i took the liberty of making a pretty basic cd cover (front only).  when you consider that louis hayes was born in 1937, and so it 77 years old… !

notes: support linda’s jazz nights by coming out for these shows: www.lindasjazznights.com 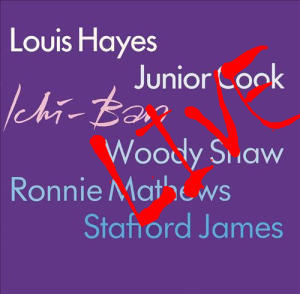 i got this back in jan 2011 when ‘kinebee’ seeded it on dime.  woody shaw really is great.  i have to give another listen to the other shows headlining louis hayes too.  i loved this… and then find ichi-ban listed on the hard bop page on tripod.  no surprise there!

this was recorded just a month before the same quintet (plus guilherme franco) recorded ichi-ban, with much the same songs (only much longer live than on lp, as you’d expect).  i’d like to get a copy, but a quick search only turned it up on diskunion jazz in japan.  gosh, they’re only “right next door”, maybe i’ll give it a try.  i’m still waiting for some cds from cdjapan… took them 10 days to ship.  i can read the cdjapan website without google translate, but i’m thinking to myself that diskunion might be faster.

i was in a couple of diskunion stores in tokyo last month, including the one specializing in jazz.  it was great!  pressed for time at each, which isn’t the best way to buy anything, and only travelling with carry-on for a 5 day trip, so space was also a serious consideration.  but i was very happy with 8 of the 9 cds that i bought.

i’m trying to find where to buy jazz cds here in seoul… it’s a search that’s fighting with a lot of similar priorities.  so any tips appreciated.  i suspect won’t be anything like japan, where every shop or restaurant that i went into seemed to be playing jazz, often very nice jazz at that, which was a real surprise.  here it’s more like k-pop is the soundtrack to the city.

notes:
ndr currently transmits an mpeg1 layer at a minimum of 2/192 kbps; however, the bitrate could actually have been higher at the time of this broadcast. to my knowledge, there is no better recording available.