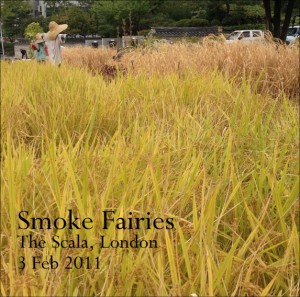 a little break from jazz.  i downloaded this when ‘rayrad’ shared it on dime a few years ago.  tried to buy an album at the time, but their website wasn’t working for me, oh well.  but i was listening to another show of theirs lately and lo! their website was working, there was a new album out, etc etc.  happy days.  i bought one of each cd, thanks much.  only arrived today, still listening my way through them, and i strongly recommend you do the same.  but at the same time this show (which, in the day, i absolutely listened the bejaysus out of) remains a favorite.  now if smoke fairies would just come to korea…

support the artist – buy the records – go to the shows

this was one of the shows put on in brussels for the irish presidency of the e.u. it was a great show. i normally listen more to jazz, but enjoyed the show immensely.

however… my first attempt to use the zoom h4n and unfortunately, some lessons learned…

i missed recording the first half of the concert, and the levels were way off when i did get it working (those bagpipes were a bit of a shock). i split tracks where i adjusted the levels, so track 1 is at much higher levels than the rest (and has pretty bad clipping).

i tried to adjust track 1 but that only made it worse (lessons to be learned there too, eh?); it is included here as-is, without adjustments

so…it’s a bit of a train wreck. that said, the sound is pretty good for the rest of the show, and i hope to do better next time.