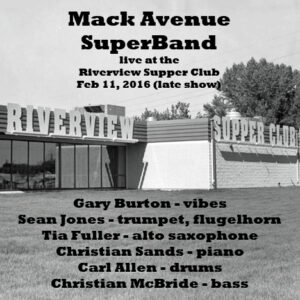 superband is totally the word here.  not much more to be said about that!  the venue, on the other hand, is a bit mysterious.  as far as i can tell, the riverview supper club closed in 2000 and the site is now condos.  and yet, the occasional later reference on the internet,  like this tim warfield setlist from 2016 or this caitlin robertson setlist from 2019.  (i’m not familiar with those musicians, btw.)  the cover is an old photo of the original riverview supper club (1980-2000), and details of its namesake are no doubt out there somewhere.  ps, the cover is not in the zip file; click on the image if you want it.

recorded and transferred by perks.

image:  a modified copy of a picture of the riverview supper club “Riverview1985MHSweb.jpg”, from the twincitiesmusichighlights.net site.

music really does pass down through families, as this show by rené mclean, son of jackie mclean.  musical families, theatre families, etc etc.  mclean really seems to stretch his legs a bit on this, just taking a run at what he wanted to play.  it’s really nice, and must have been mesmerizing in person.  that can be a bit dangerous sometimes – your mind starts to drift, your eyes close…  – but there’s no falling asleep with this.

this was shared around a year ago on dime, and i’ve redone the info file based on comments on the dime tracker.

2018-08:
new info file created with additional details from tracker comments by justplainhip, when seeded
on dime in july 2017 by cosmicchucky

i’ve enjoyed everything that i’ve heard by christian mcbride & inside straight.  i’ve included the comments from the seeder on dime (scooter123), below… i guess this makes me stodgy and fond of straight ahead jazz.  the latter, yes but not exclusively, and i’d like to think not the former (yet?).  anyway, this is a very good recording (fm) of a very nice show.

i’m worried about moving the many shows that i’ve downloaded from dime to seoul, korea, this summer.  thinking of squeezing everything i really want onto one 2-tb usb drive, with another as backup.  send one by air, one by sea? one by air, one in my luggage?  decisions decisions, if only the rest of the move is as difficult.

this was the genesis of this group of back up musicians. the phrase “inside straight” refers to an “inside” groove and “straight” ahead jazz.  so if you are ready, for top knotch, straight ahead jazz, press the green enter  button and enjoy. if you like this one, i’ll up an audience of the inside straight  last week at a small west coast jazz club.