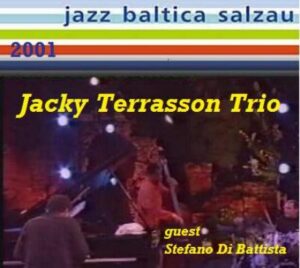 always nice to hear a jacky terrasson show, and here’s one with a little bit of icing on the cake:  stefano di battista and severi pyssalo on two tracks near the end.

i got this version in 2003 when ‘maddrax’ shared it on dime, but the cover is from a version posted on the (apparently now defunct) blog in jazz – and is not in the .zip file.

here’s a show that i was enjoying this evening in between phone calls.  ‘survivor69’ shared it on dime in june 2014 and described it well:  quite classic jazz.  and very cheery, i thought, a real pick me up.  survivor69 called the show parker’s mood, since these long tracks are mostly from the album “woman’s land” , and somehow are intended in bird’s mood…, and di battista had an album “parker’s mood”.  i suppose that all hangs together.  speaking of charlie parker, i was also listening to stars of modern jazz, a phenomenal bootleg with several tracks by charlie parker.  look for that up next.  synchronicity.

but this has been mouldering away on my hard drives, probably unheard since i first downloaded it and gave it a listen.   i listen to virtually everything that i download, except the videos — for some reason, those are often overlooked.  so a lot of stuff never gets a second look.  unless, as today, i pick a random show.  today was “s” day; and so stefano di battista.  mind you, some still doesn’t get a 2nd listen past the first song.  but other shows make it into the car… or even up here.

survivor69’s comments:
these long tracks are mostly from the album “woman’s land”, and somehow are intended in bird’s mood… quite classic jazz, i would say… also included in the folder as track 00 a radio introduction in italian with bio notes and commentaries – this intro runs for 2’39”, you can skip downloading it if you don’t understand italian.