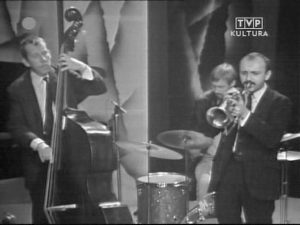 this was seeded recently enough on dime by ‘davidraphael’, in video format, which i’ve demuxed. the sound quality is very good. it was seeded as “requiem for john coltrane” (a.k.a. “nighttime daytime requiem”) but on www.komeda.art.pl it’s just “nighttime daytime requiem”.  either way, allaboutjazz.com says that it “was written as a response to the news of the death of saxophonist john coltrane”.  it’s a great tribute to coltrane, and i would be interested to know what was said about him in the short interview in the middle of the performance.

source:
from a black and white telerecording (kinescope) from 1967, rebroadcast 2006/02/07 and captured from analog tv (pal)
video (vob) > ffmpeg (demux to wav) > cd wave (track) > tlh (encode) > flac
we don’t know the characteristics of the original audio, but the video had a pcm audio track.
quality is excellent, considering the age and method of this recording.