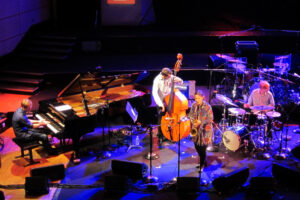 there’s a nice write-up of the show, with some pics (including the one to the right) at jazzmagazine.com, that ended on a note i quite like, “a very nice discovery for all the spectators, obviously won over (just like yours truly), and the hope of hearing this great musician again”.

unrelated to any of that, open culture has an article watch jaco pastorius: the lost tapes documentary, the fan-made film on the most innovative bass player of all time that might be of interest.  (i’ve not actually watched it yet, but open culture is a pretty good site, so i have high hopes.)

finally, is it just me or is myspace a total waste of time?  never go there and can find out anything, even when i’m on the right page.  like, i don’t even link to it now.  #InternetSearchPerils anyone?

the photo is a cropped shot taken from the page mentioned above.