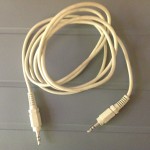 i’ve been meaning to try recording from online audio (e.g. webcasts / realplayer /etc) for some time.  one simple method is just to hook up your audio-in and audio-out outlets with a “male-to-male” audio cable.  which i happen to have (and have had for years… guess i’m totally lame that it’s take so long to try this).

anyway, i ran across the u.s. library of congress national jukebox, and inspired by a concert i was listening to recently which had song with lyrics by p.g. wodehouse, i thought it was time to give it a try.  the national jukebox streams using adobe flash player — looks as if the music is in mp3 format, no idea what quality.

so, hooked up the cables, fired up audacity, and recorded a couple of songs.  came out very well!  here’s a copy of “nesting time in flatbush” from 1917, featuring soprano ada jones & tenor billy murray, music by jerome kern & lyrics by p.g. wodehouse.