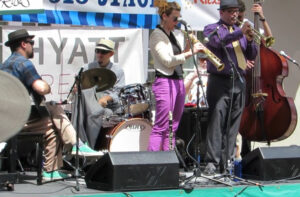 here’s the second show from the “a” part of the alphabet, aurora nealand from the new orleans jazz fest.  it’s a bit more new orleans and bit less django-esque to say the least, but again highlights my weakness for the clarinet (not that aurore voilqué had a lot of clarinet).  what can i say?  they worked well together for me, and i hope for you as well.

my wife says that i’m wrong about the instruments at our wedding, that it was an accordion not a violin (which would have worked better with dad’s song).  that’s entirely possible, memory is a tricky thing, as is perception:  new neighbors moved in across the street.  i was opening the curtains the other day, and they were setting out with their kids in their school uniforms for the first day in their new school(s?).  later that same morning, i remembered the uniforms being brown, my wife remembered blue.  we’re still waiting to see those children in their uniforms to settle the matter.

this performance was not broadcast live but was delayed until the next day, april 26, 2014.

the photo is a screengrab from a 2013 performance in the french quarter.